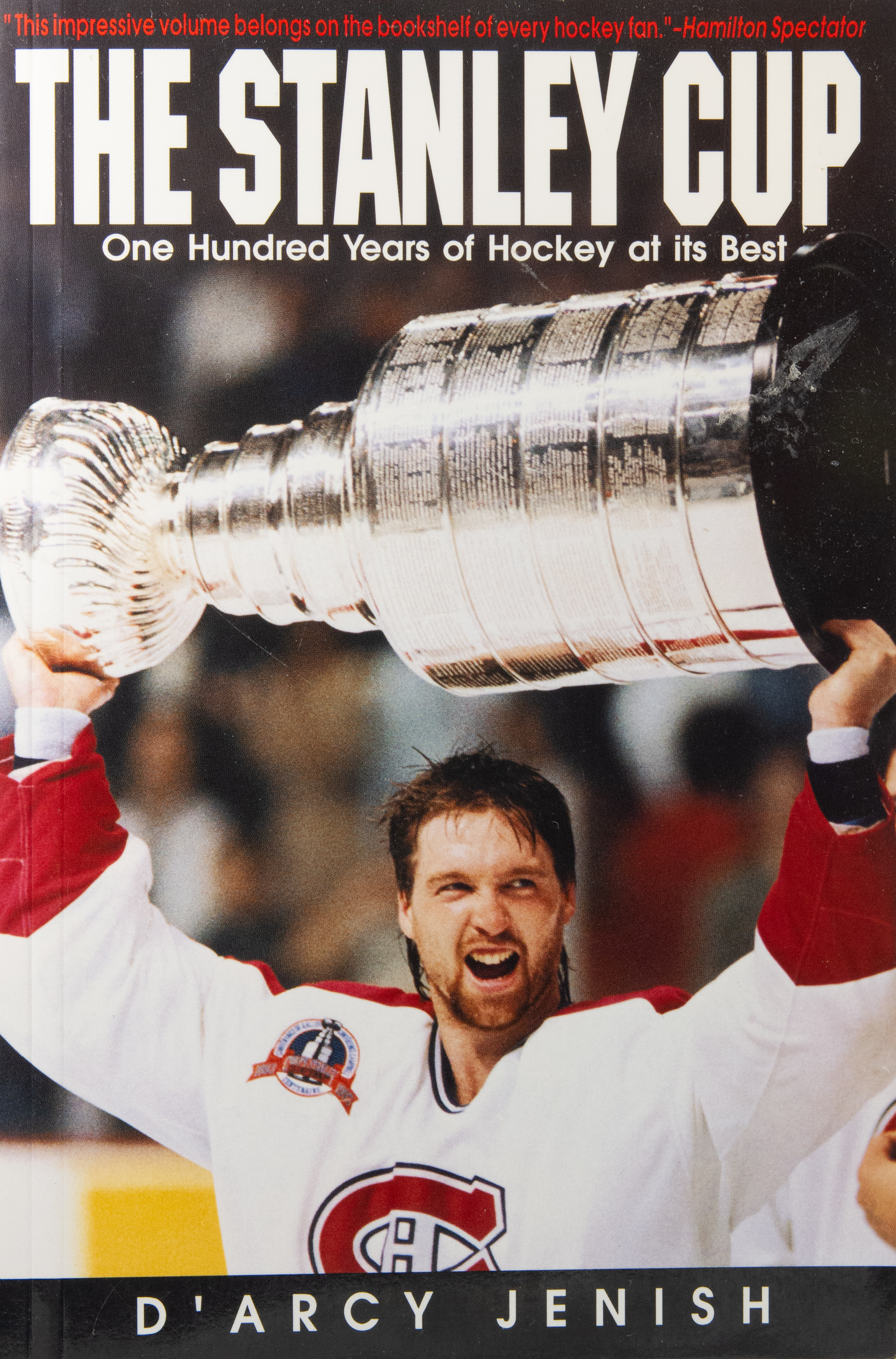 100 Years of hockey at its best

Professional hockey’s ultimate spectacle occurs in early June each year when a single player, surrounded by jubilant teammates, stands at centre ice in a packed and tumultuous arena, and hoists the Stanley Cup toward the heavens. This ritual, deeply engrained in the Canadian psyche, has become one of the most concise, compelling and powerful images of victory in all of sport…This gesture is ancient in origin and primitive in nature. Every player who holds the Cup above his head is responding to the same impulse that has seized the conquering warrior from time immemorial. It is the urge to stand on the hilltop or the rooftop and show tangible proof of triumph.

So begins D’Arcy Jenish’s comprehensive and insightful history of the first century of Stanley Cup competition. Based on contemporary newspaper accounts and interviews with over 60 players, coaches and managers, it is a vivid account of what happened on the ice and in the stands. Indeed, readers and reviewers alike were captivated by the author’s depiction of crowded, smoke-filled arenas and the passions generated by the battles for hockey’s ultimate prize.

The crowds of the 1890s and early 20th century were every bit as loud and boisterous as contemporary crowds. When their team won, they frequently carried the players off the ice or through the streets. They gave the players rousing send offs at railway stations when they were leaving for a Stanley Cup series. Mobs of jubilant fans would greet a team that returned with the Cup.

Canadians have always been willing to pay exorbitant prices to see a Stanley Cup game. In December, 1896, for example, a Winnipeg man traded 2 1/2 tons of coal for a $2 ticket.

Today, every arena has an official seating capacity that is strictly enforced. In the early days, the teams frequently sold more tickets than their buildings could seat and the police sometimes had to cut off sales. The overflow fans filled the aisles, stood five to six deep in the standing room sections or sat in the rafters.

Gambling has more or less disappeared from the hockey scene, but in the early years fans and players frequently wagered thousands of dollars on the outcomes. In March 1907, the Kenora Thistles and Montreal Wanderers played a Stanley Cup series in Winnipeg. The arena was packed for the opening game, the crowd was cheering wildly and, according to one newspaper account: “There was heavy betting all over the rink. Big bets were placed in the dressing rooms before the game.”

Throughout this engrossing history, Jenish charts the rise and fall of hockey’s great dynasties such as the original Ottawa Senators, the Montreal Canadiens, the Toronto Maple Leafs and the Edmonton Oilers. And he documents the incredible feats of the game’s greatest players from Frank McGee to Rocket Richard to Mario Lemieux.

“Any journalist who reads this book will be impressed by the depth of the research Jenish has obviously done. He has turned up new anecdotes in exploring what had been considered familiar territory.” – Jim Proudfoot, Toronto Star.

“Though many books have been written on the Stanley Cup, Jenish’s effort is a gold mine of new material…” – David Staples, Edmonton Journal.

“Jenish keeps it simple, but riveting with first-rate research, quoting liberally from the lavish sports writing of the times and interviews with parties who have witnessed some of hockey’s most dramatic challenges for the Cup.” – John Kernaghan, Hamilton Spectator.